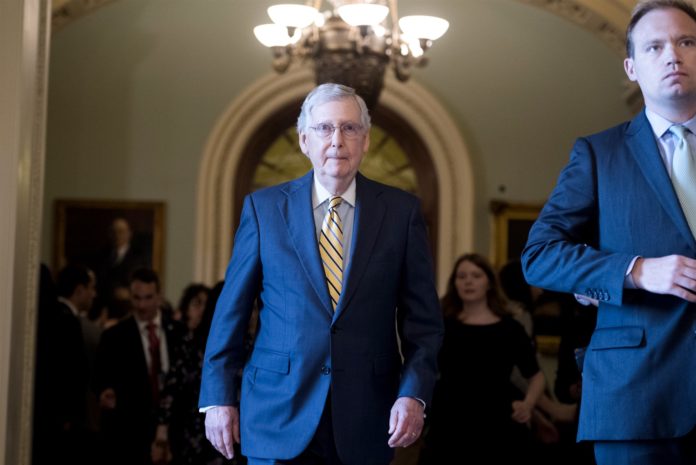 Senate Majority Leader Mitch McConnell, R-Ky., on Tuesday confirmed that he is a descendant of slave owners and reiterated that he still opposes government reparations for descendants of American slaves.

At a press conference following a closed-door luncheon with Senate Republicans, McConnell was asked whether he was aware that two of his great-great-grandfathers were slave owners in Alabama before the Civil War and whether the revelation would cause him to reconsider his position on reparations.

“I find myself once again in the same position as President [Barack] Obama. We both oppose reparations and we both are the descendants of slave owners,” he said, before moving on to another question.

McConnell did not say whether he knew that his two great-great-grandfathers owned slaves prior to an NBC News report published Monday.

The majority leader’s great-great-grandfathers, James McConnell and Richard Daley, owned a total of at least 14 slaves in Limestone County, Alabama — all but two of them female, according to the county “Slave Schedules” in the 1850 and the 1860 censuses.

The details about McConnell’s ancestors, discovered by NBC News through a search of ancestry and census records, came in the wake of recent hearings on reparations before the House Judiciary Subcommittee on the Constitution, Civil Rights and Civil Liberties.

Asked about the reparations issue a few weeks ago, McConnell told reporters that he was opposed to the idea, arguing it would be hard to figure out whom to compensate.

“I don’t think reparations for something that happened 150 years ago, when none of us currently living are responsible, is a good idea,” he said June 18, a day before the House reparations hearing. “We’ve tried to deal with our original sin of slavery by fighting a civil war, by passing landmark civil rights legislation. We’ve elected an African American president.”

These real estate players have raised a bundle for Biden