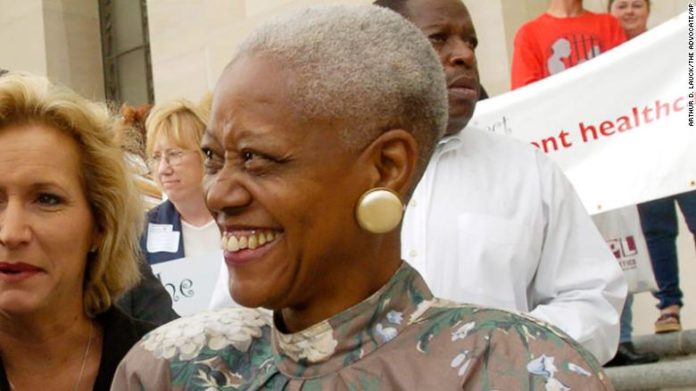 A beloved activist and founder of an African-American museum in Baton Rouge was found dead in the trunk of a car, CNN affiliate WBRZ reported.

The body of Sadie Roberts-Joseph, 75, was located Friday but it wasn’t immediately clear what led officers to the car. The cause of her death is still unknown, police told the station.
The vehicle was about 3 miles from her home, CNN affiliate WAFB reported.
Roberts-Joseph was a renowned advocate in the Baton Rouge area. She founded the Odell S. Williams Now and Then African American Museum in 2001, where she had been hosting the city’s Juneteenth celebration for years.
“Ms. Sadie was a tireless advocate of peace in the community,” the police department said in a statement. “Ms. Sadie is a treasure to our community, she will be missed by BRPD and her loss will be felt in the community she served.
She also founded Community Against Drugs and Violence, a non-profit organization focused in creating a safer environment for children in North Baton Rouge.
Local politicians, advocates and community members on Saturday mourned Roberts-Joseph’s death.
State Representative C. Denise Marcelle said in a Facebook post that the activist “never bothered anyone” and was looking to expand her museum.
The NAACP Baton Rouge Branch remembered Roberts-Joseph in a Facebook post.
“We lost a Cultural Legend Yesterday! #RIP Sadie Roberts Joseph,” the group wrote. “From reviving Juneteenth, to the Culture preserved at Her Museum, she was a trendsetter and icon in this City.”
Police investigating the activist’s death urged anyone with information about the case to call police detectives at 225-389-4869 or Crime Stoppers at 225-344-STOP (7867).

July 20, 2019
0
That may sound like an Onion headline, but alas, it is not. We’ve reached the point in our wild planetary experiment where humans are...

How Medicare For All Could Dramatically Boost Access To Medical Marijuana

Arctic and Antarctic Sea Ice: How Are They Different?