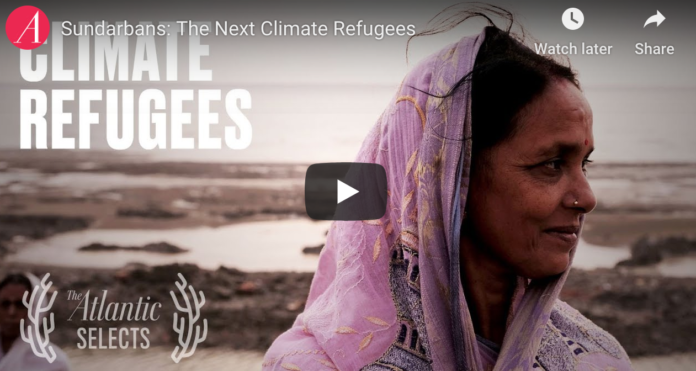 “We were so terrified with the water coming into the house and the sound of the storm. In front of my eyes, the walls of our house collapsed.” That’s Geeta Maiti, a resident of Mousuni Island, which is part of the Indian Sundarbans—a 4,000-square-mile archipelago that has been designated a World Heritage site. Sitting on the Bay of Bengal, shared by India and Bangladesh, the region has a rich ecosystem that supports the world’s largest mangrove forest and several hundred animal species, including the endangered Bengal tiger. It is home to approximately 13 million people.

All of this could disappear in just a few decades. The Sundarbans is one of the most vulnerable areas to climate change in the world; 70 percentof the land is just a few feet above sea level. In some parts of the region, the sea is already advancing about 200 yards a year. Mousuni Island, in particular, is experiencing the worst effects of the changing climate. Coastal erosion, floods, salinity ingression, and increasingly violent storms have rendered most of the land barren. In the past decade, the island’s inhabitants have seen their houses and livelihoods destroyed. It is now primarily home to women, children, and elderly people, as more than half of the male population has migrated to urban areas for work. Some families have been forced to leave entirely. What was once a self-sustaining agricultural community is now on the front lines of the climate crisis.

The journalists Lisa Hornak and Erin Stone traveled to Mousuni Island to see what life was like for the island’s remaining inhabitants. Their short documentary, Losing Ground, premiering on The Atlantic today, hears from people who fear they will become the next wave of climate refugees—and some who already have. (In 1996, the Sundarbans island of Lohachara became the first inhabited island in the world to be submerged by the sea, and its inhabitants the world’s first climate refugees.)

“We are born farmers,” says one of the men from Mousuni Island in the film. “We don’t have the capacity to do different work. What else can we do? We are surviving, barely.”

Stone says that many climate refugees from across the Sundarbans have migrated to Dhaka, Bangladesh, and now live in conditions of “intense crowding and poverty.” Some families migrated as far as the Middle East to look for work. Hornak told me that this phenomenon is indicative of a growing trend. “We will likely see a shift in how our societies are structured,” she said.

While the economic and geopolitical struggles facing the residents of Mousuni Island are salient, the film also focuses on the emotional toll that the permanent environmental changes have taken on residents.

Hornak pointed out one of the great tragedies of the situation in the Sundarbans: Mangrove forests are some of the most effective known carbon sinks. In other words, mangroves naturally remove CO2 from the atmosphere and store it in their soil, a process known as carbon sequestration. (A 2017 study showed that Sundarbans mangroves removed 98 percent of the carbon emitted by a local power plant in one year from the atmosphere.)

What’s more, the inhabitants of the Sundarbans produce a nominal carbon footprint compared with much of the rest of the world. Stone said this unequal distribution of climate consequences is likely to continue. “It is the people who have almost zero contribution to the greenhouse gases that fuel global heating who are most impacted.”

November 17, 2019
0
Thailand is ramping up medical marijuana legalization efforts that will soon allow all Thais to cultivate six cannabis plants in their homes and sell...

Arctic and Antarctic Sea Ice: How Are They Different?