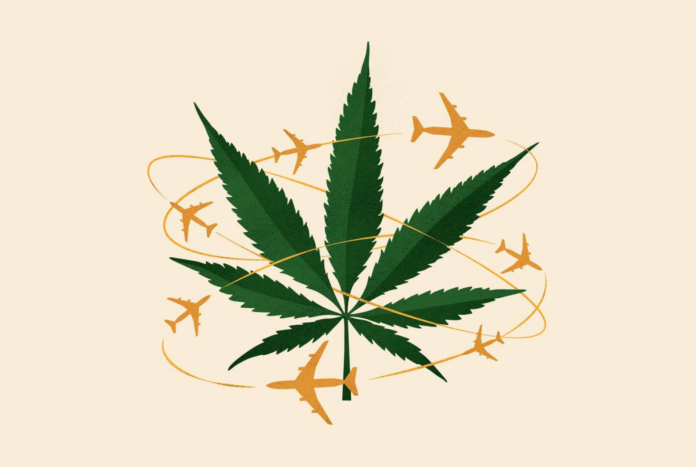 No matter where you’re going and how you’re getting there, traveling with marijuana is a challenge. If you’re a marijuana consumer, going on trips usually always prompts the question: Where am I going to find marijuana once I’ve arrived at my destination? While some rely on friends to point them in the right direction, you still need to know the state’s stance on legal weed.

Traveling with your own cannabis should be the logical choice, but it’s not. Despite the progress cannabis has made in the past few years, traveling with the drug, whether it’s medicinal, recreational or you’re traveling by plane or train, remains a bleak process, one that could easily put you in jail or in an awkward legal situation.

Here are 5 questions you may have about traveling with weed:

What’s the deal with airports?

Even without adding marijuana in the mix, airports are complicated places where you should be on your guard. If an agent finds marijuana, they’ll likely report it to the police and you’ll find yourself navigating the state’s regulations on marijuana, which can be very strict depending on where you are. It’s not advisable having any marijuana on you while in an airport.

What’s the TSA’s stance on marijuana?

According to an April 2019 TSA Instagram post, agents are looking for possible threats and are not interested in drugs. Still, if officials find drugs on you, they’re forced to take them and report them to the police.

Despite the fact that CBD is legal on a federal level and that the TSA says CBD oil is allowed in carry-on and checked out luggage, you should still ensure that your product contains less than 0.3% of THC. The fact that many CBD products are not FDA approved means that there’s a lot that depends on the officer who’s handling your case.

What if you have a medical marijuana card?

While it’s always important to have your documents on you, including medical marijuana card and a letter or prescription from your doctor, you should still be careful when having marijuana on you. Medical marijuana cards are not valid in states where the drug is illegal and, even if you’re in a legal state, TSA agents have no way of checking the validity of these cards. Again, it all depends on the officer on duty, and it remains a big risk to have drugs on you in an airport.

What if you’re driving or traveling by train?

When driving, it’s important to be discreet and to know the laws of the states you’re passing by. Check the amount that won’t get you in trouble and keep all drugs and alcohol in the trunk of your car. Carry all of your documents with you and never travel with medical marijuana in states where the drug remains illegal.

When traveling by train, most services prohibit all drugs and alcohol, whether they’re located in checked bags or on you. Still, read up on the different policies of these businesses since they tend to have small differences.

This 40,000-Year-Old Wolf Head Was Found in Siberian Permafrost

Chicago Airports Have Installed Drop Boxes For Passengers To Get Rid...