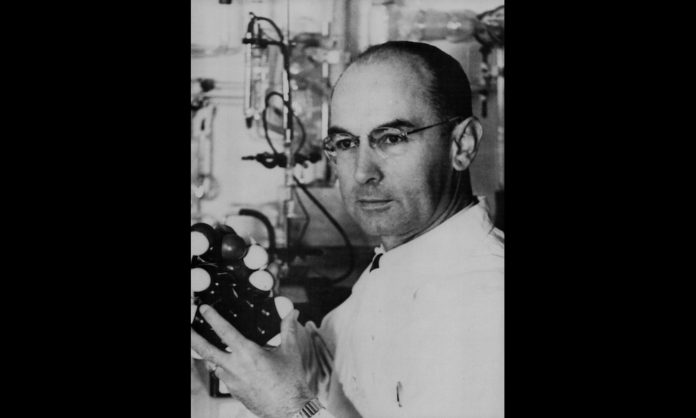 At the height of World War II, four months after the first artificially created nuclear reaction was released in a pile of uranium ore in Chicago, an accidentally absorbed trace of a seminatural rye fungus product quietly exploded in the brain of a 37-year-old Swiss chemist working at the Sandoz research laboratories in Basel. He reported to his supervisor: “I was forced to stop my work in the laboratory in the middle of the afternoon and to go home, as I was seized by a peculiar restlessness associated with a sensation of mild dizziness … a kind of drunkenness which was not unpleasant and which was characterized by extreme activity of imagination … there surged upon me an uninterrupted stream of fantastic images of extraordinary plasticity and vividness and accompanied by an intense, kaleidoscopelike play of colors….”

Three days later, on April 19, 1943, Dr. Albert Hofmann undertook a self-experiment that both confirmed the results of his earlier psychoactive experience and revealed a fascinating new discovery: Here was the first known substance that produced psychic effects from dosages so tiny they were measurable only in micrograms! Dr. Hofmann had discovered LSD-25.

Lysergic acid diethylamide (LSD) was enthusiastically investigated by the European psychiatric profession as a possible key to the chemical nature of mental illness. Its effects were believed to mimic the psychotic state. As soon as LSD was introduced to American psychiatry in 1950, interest spread rapidly among the United States military and domestic security interests. By the middle 1950s, LSD was being researched as a creativity enhancer and learning stimulant; rumors of its ecstatic, mystic and psychic qualities began to leak out through the writings of Aldous Huxley, Robert Graves and other literary luminaries.

A large-scale, non-medical experiment involving LSD and other psychedelic drugs at Harvard in the early Sixties precipitated a fierce controversy over the limits of academic freedom and focused national attention on the drug now known as “acid.” Midway through the turbulent decade, one million people had tried black-market LSD, engendering a neurological revolution the fallout of which has not yet been assessed. In 1966, Congress outlawed LSD.

Dr. Hofmann now lives in comfortable retirement on a hill overlooking the Swiss-French border. He granted High Times this exclusive interview to discuss not only the implications of his discovery of LSD, but also his less publicized chemical investigations into the active agents of several sacred Mexican plants.

Considering his life’s work, Dr. Hofmann seems a likely candidate for the Nobel Prize in chemistry. Not only have his discoveries broadened our knowledge of psychoactive chemicals and triggered the imaginations of thousands of scientists, historians and other researchers, but they have had a direct and revolutionary impact on humanity’s ability to understand and help itself.

I was at first not in agreement with the idea of publishing this interview here. I was surprised and shocked at the existence of such a magazine, whose text and advertising tended to treat the subject of illegal drugs with a casual and non-responsible attitude. Also, the manner in which High Times treats marijuana policy, which urgently needs a solution, does not correspond to my approach. Nevertheless, I came to the decision that my statement’s appearing in a magazine directed to readers who use currently illegal drugs might be of special value and could help to diminish the abuse or misuse of the psychedelic drugs. Michael Horowitz convinced me that an accurate description of the discovery of LSD and the Mexican magic plants, about which so many misleading versions exist, and my opinion on the various aspects of the drug problem, among other topics, would be useful to a large audience of interested persons in the United States. The aims of this interview are to provide information about what these kinds of drugs can and cannot do, and what their potential dangers are.

5 Etiquette Tips In Case You Ever Meet A Royal