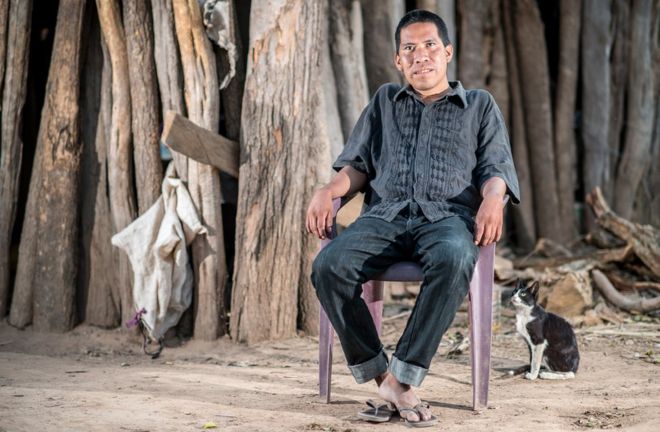 Chagabi Etacore was a young child in 1986 when he heard a helicopter hovering over his home in Paraguay’s Chaco forest. A member of the Ayoreo Totobiegosode tribe, Chagabi had never before seen the outside world. His family lived nomadically, sleeping around a hearth and growing melons in the forest’s sandy ground. The arrival of the helicopter marked the end of Chagabi’s life as he knew it.

Trucks arrived, and a group of indigenous people ran into the clearing where Chagabi’s tribe had set up camp. The indigenous people, who had been co-opted by missionaries, attempted to capture the whole tribe.

A battle ensued, but the Ayoreo Totobiegosode eventually submitted and were forced into the trucks. They were driven to a base set up by a group of American fundamentalist Christians known as the New Tribes Mission.

The missionaries had sent indigenous people that they had already evangelised on a “manhunt” to capture Chagabi’s tribe. At the mission, Chagabi and his tribe lived for years in unpaid servitude and were exposed to diseases to which they had no immunity. Many died. Chagabi contracted a chronic lung infection from which he suffered for the rest of his life – and which eventually caused his death this week.

Although his exact age was unknown, Chagabi is thought to have been in his early forties.

“Chagabi’s goal was a world in which human rights were respected,” said Lucas Bessire, an associate professor of anthropology at the University of Oklahoma, who has spent extensive time living with the Ayoreo and worked closely with Chagabi. “A world where people of any background had the opportunity to realise their own goals on their own terms.”

In the 1990s, Chagabi was a driving force behind some of the Ayoreo Totobiegosode’s move away from the mission to set up their own communities.

As a teacher, health worker, film-maker, deforestation activist, political negotiator, translator and father of three, Chagabi achieved much in his short life.

Leading the fight against deforestation

The Chaco forests of Paraguay and Bolivia are inhabited by about 5,000 Ayoreo, of which the Ayoreo Totobiegosode – Chagabi’s tribe – are a sub-group. Their name translates as “people from the land of the wild pigs”.

As some members of the community are still living in isolation, they are officially the last uncontacted indigenous people in the Americas outside of the Amazon. It is unclear how many still live in isolation.

Since Mennonite farmers first invaded the Chaco in the 1940s, it has become one of the world’s fastest disappearing forests. During Gen Alfredo Stroessner’s 35-year dictatorship over Paraguay, which ended in 1989, the northern Chaco region was divided and sold to private landowners – mainly wealthy Paraguayan and Brazilian cattle ranchers. An area two and a half times the size of Hong Kong is destroyed every year.

In the past few decades, previously uncontacted members of the Ayoreo have fled the forest to escape from bulldozers they call “beasts with metal skin”, which have destroyed their villages.

Chagabi played a crucial role in fighting for the government to return ownership of 550,000 hectares (1.3 million acres) of land to the Ayoreo Totobiegosode in 1993. Because he spoke reasonable Spanish, Chagabi was often used as an intermediary between the Ayoreo and mainstream society.

There have been small victories. In April, the Ayoreo Totobiegosode received ownership papers for 18,000 hectares of forest. But that is insignificant in comparison with the 250,000 hectares of Chaco forest that are destroyed every year.

“He was very resolute and determined to try and save as much of the forest as he could, partly because he had relatives who are still living in the forest,” said Jonathan Mazower from Survival International.

Chagabi was also an activist in the battle against illegal logging, setting up a control point right at the entrance of the forest and building houses there so the Ayoreo Totobiegosode could take turns to monitor any illegal activity.

“Chagabi was someone who had been through extreme trauma,” said Xilo Clarke from Survival International. But as a healthcare worker, “he was providing life-saving support”.

Chagabi was the first Ayoreo Totobiegosode member to start nursing training, serving a community who suffer disproportionately high rates of disease and mortality. Discrimination against indigenous people and issues with translation mean that accessing healthcare is difficult for the Ayoreo.

Being excluded from a market economy, the Ayoreo are stuck between two worlds, explained Xilo, but Chagabi acted as a bridge between the two, while also fighting to protect those tribe members still in isolation. Chagabi also showed artistic skill when he made a film about the importance of water in his community.

Xilo met Chagabi in April and filmed an interview with him. In it, he came across as a reluctant hero, one obliged to take on the role of a father figure for the Ayoreo rather than choosing it. Xilo described him as “humble and stoic”.

In the video, Chagabi showed no anger or resentment towards the people who forced him from his home and exposed him to the disease from which he was dying. He expressed empathy and forgiveness. He understood the missionaries wanted the Ayoreo to live in their society so they could lead “a good life”.

“They believed living in the forest was difficult for us – not listening to the word of God, the Bible,” he said. “They thought that by forcing us out of the forest we could be saved.”

But, he added, “we didn’t want this contact and we are still suffering its effects, its consequences.”

A ‘victim of state neglect’

The New Tribes Mission has since been renamed Ethnos360, which has not responded to the BBC’s request for comment.

In 1987, the New Tribes Mission’s director, Fred E Sammons, told the New York Times: “We never force our religion on anyone.” He said the Ayoreo lived “in fear of evil spirits and in fear of violent death because it’s in their culture to kill. But when they come with us, they accept a new way of life.”

But some anthropologists argue that bringing the Ayoreo into the outside world forced them into the margins of society and wiped out much of their culture. In his chronicle of Ayoreo life, Lucas Bessire said he witnessed a “mosaic of violence”, describing how many of the girls exchanged sex for money and “the pet parrots in one settlement imitated tubercular coughing”.

He quoted Ticio Escobar, Paraguay’s former minister of culture, who said the Ayoreo showed “all of the side effects of losing one’s cultural identity: alcoholism, social disorganisation, apathy, violence, suicide, prostitution, and marginalization”.

Critics claim that Chagabi, like many other indigenous people in Paraguay, was a victim of neglect from the state. Three quarters of Paraguay’s indigenous population live in poverty, according to the international work group for indigenous affairs.

In 2007, Paraguay voted in favour of the UN declaration on the rights of indigenous peoples, but during a 2014 visit, a UN special rapporteur, Victoria Taulo-Corpuz, expressed concerns about Paraguayan indigenous people’s land rights as well as their access to social services and the judiciary.

In the video interview, Chagabi’s illness was starting to have a visible impact. His breathing appeared laboured and Xilo said he was struggling to keep up with the physical work they were doing.

Chagabi’s death was avoidable, Xilo said. “He should have received care his whole life. The government has not done enough.”

But she remembered the warmth that Chagabi exuded despite all he had suffered, and despite feeling that his death was as a result of neglect. Xilo is hopeful that the fight will continue without him, echoing Chagabi’s final message in his interview.

“My hope for the future is that our young people, the children, our new generations will not be ashamed of our culture,” Chagabi said.

“I hope that they will continue practising our Ayoreo culture, because if they forget it, it will be very difficult to recover it afterwards.”

October 31, 2019
0
People of color have faced hurdles in joining the burgeoning legal cannabis industry, despite bearing the brunt of marijuana arrests from the United States’...

Ebola outbreak in the Democratic Republic of the Congo declared a...

These Companies Want to Make CBD More Affordable for Veterans

The Next Wave of Climate Refugees