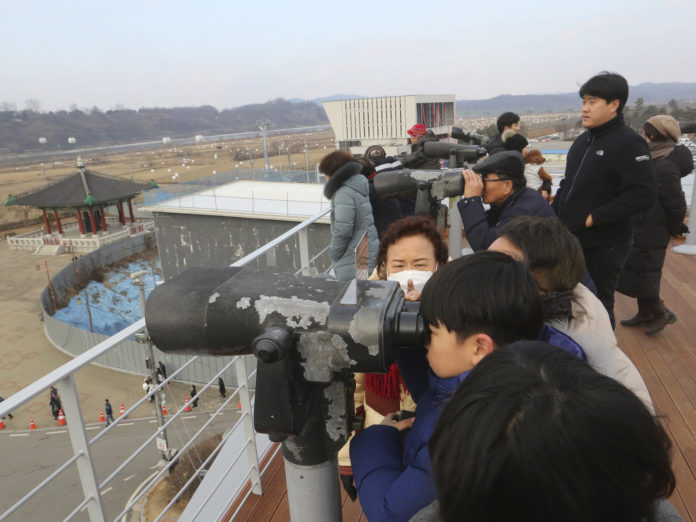 After keeping the world waiting and watching, first for a “Christmas present” to the U.S., and then for a New Year’s shift to a harder line on nuclear negotiations, North Korean leader Kim Jong Un delivered neither.

Some analysts believe a key reason behind his calculations may be President Trump’s prospects for surviving an impeachment process and possibly winning a second term in the White House.

“Donald Trump happens to be the first sitting U.S. president to view North Korea as a source of political victory, for domestic purposes,” says Go Myong-hyun, a research fellow and expert on North Korea at the Asan Institute for Policy Studies, a Seoul-based think tank.

Pyongyang has said it has no intention of handing President Trump any victories on denuclearization, but officials see Trump’s eagerness to tout achievements to his domestic audience as a source of leverage.

In remarks carried by state media, Kim on Tuesday had plenty of tough words for the U.S. as he addressed a plenum of the ruling Workers Party Central Committee. He acknowledged the countries’ current stalemate on nuclear talks, but insisted he would not passively wait for things to improve.

“We should never dream that the U.S. and the hostile forces would leave us alone to live in peace, but we should make [a] frontal breakthrough with the might of self-reliance,” he told the plenum as it wrapped up four days of meetings.

He also asserted that North Korea is no longer constrained by a self-imposed moratorium on nuclear weapons and long-range missile testing.

Still, Kim said Pyongyang had unilaterally halted nuclear and intercontinental ballistic missile tests in order to build confidence with the U.S. And he appeared to leave the door open for concessions and further talks.

North Korea expert Park Hyeong-jung predicted that outcome even before the speech.

Park is with the Korea Institute for National Unification, a government think tank in Seoul, and says Pyongyang will not “take any action to damage its relationship with the U.S. irreparably.”

Pyongyang had warned it could take a tougher “new way” if the U.S. failed to meet its demands for concessions by year’s end.

“Kim Jong Un will have to stage some anger at the U.S. and chastise them” for ignoring his year end deadline, Park predicts, but could be willing to return to the negotiating table by summer if the U.S. shows signs of accommodating Pyongyang.

Still, a lot could happen in U.S. politics by summer. “If they calculate that President Trump won’t be re-elected next year,” says analyst Go, “then their approach is going to fundamentally change.” At that point, Go says, Pyongyang could unleash provocations that leave little room for compromise.

For now, analysts see a prolonged stalemate over North Korea’s nukes as all but inevitable.

“Nuclear weapons are very good for self-defense, and for preserving the existing status quo,” argues Texas A&M University political scientist Matt Fuhrmann. But he says they’re not especially useful for forcing changes to the status quo, as in “using nuclear threats to blackmail your adversaries.”

Fuhrmann says that Kim has been “relatively successful” in acquiring nuclear weapons in order to ensure the survival of his regime, and it is unlikely that he could be compelled to give them up.

But using nuclear threats to extract concessions from the U.S., such as security guarantees or the sanctions relief Pyongyang seeks, would be far more difficult. This is because actually using the nukes would all but ensure the regime’s extinction, Fuhrmann says, even if they continue to build their arsenal.

North Korea’s only remaining tool is nuclear brinksmanship — essentially bluffing opponents into thinking Pyongyang might actually use atomic weapons, even though it is plainly evident that the cost of doing so is prohibitive for both sides.

Fuhrmann’s theory has implications for policy: a nuclear-armed North Korea is not the apocalyptic event some fear, “even if we might prefer a situation where they were not to have nuclear weapons.”

He advises that a complete and verifiable nuclear disarmament is “somewhat unrealistic.” Better, he says, for the U.S. to “look for a deal that allows us to place meaningful limits on North Korean capabilities.”

These Are The Top 10 Destinations In The World Right Now,...

October 4, 2019
0
Every year, TripAdvisor travelers vote on their favorite things around the world for our Travelers’ Choice Awards. We highlight the top picks in all...

America’s top 10 most sustainable buildings of 2018

Climate Activist Greta Thunberg Will Sail Across the Atlantic for a...